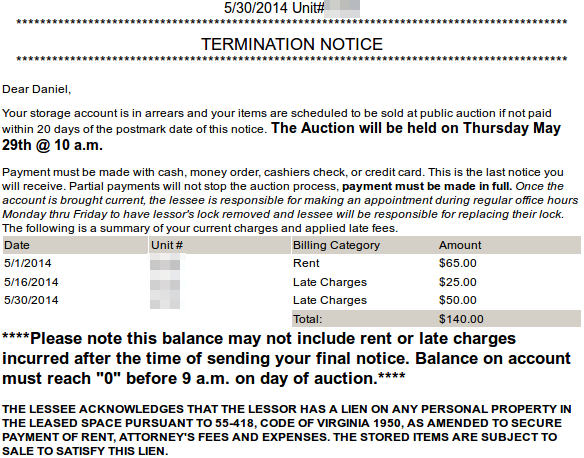 Don’t check your email before…

Yes, just as I was about to go to bed to sleep I decided to check my e-mail.  It was there I found a Termination Notice for my storage unit.  I knew I was about one month late with payments, but then my eyes saw the following “The Auction will be held on Thursday May 29th @ 10 a.m.” … wait … today is June 2nd… so this happened a few days ago?  But I was just on the phone with them on the 27th…

Then it began.  I had just checked my e-mail at a time it should never be checked.  And that is… when you can’t do anything about it.  Yes now I had to deal with a huge swell of thoughts and emotions.  Imagine if your house had just burned down and you lost everything.  Yes this is kind of like that.

First I felt sad, thinking of all I had lost.  But I knew better.  A person is not their things, there is more to life then that.  So I prayed a prayer of surrender offering all I had to God.  Although this time it was very real and powerful since the loss was understood.  I gave it all to God and said that everything I owned was in His hands, and if He willed He could restore what was lost for I know He is able.

The ties to memories and the things that help those memories persist are very strong.  Even though I had prayed and given from my heart what I owned to God, I found my mind remembering each individual thing and grasping it as a fresh loss, something not yet given.  And it hurt.  I didn’t allow the sadness to grow; no, at each new sorrow I would turn and give it to God.  And it made me realize that this wouldn’t end with a basic prayer for all, because I would have to deal with the emotional ties to each individual item as they were remembered… which could still be for many many years to come.  That, my friends, is a hard thing to swallow.

So such thoughts kept me from sleep.  I did genuinely give and trust God.  And as I was about to fall asleep in peace a loud noise broke me from my rest.  And since I hadn’t slept but three hours the previous night it’s not as though the strength of my will was very strong.  I had to deal with more emotional ties that rose to memory by prayer.  Yes that night was a long one.

After sleeping in, to get a proper amount of rest, I called the storage company and  I asked him about the e-mail.  He sad this “I had meant to delete the date from that e-mail but I forgot.”  Yes… he forgot a small detail that would put anyone through a level of trauma…  * * sigh * * I didn’t sound angry or worried when I called. I didn’t raise my voice or get frustrated.  After feeling such a great loss  and ‘dealing with it’, the heart is tender.  The way the man answered was as if he were uncomfortable.  Like he knew the consequences of having done what he did and it didn’t sit right with him.  I asked him “didn’t I call before that date?”  And he said that yes he could see in the notes that I had called and said I would do my best to get the payment in.  He also informed me that there wouldn’t be an auction until July.  So …

So yes, that’s the story I lived.  So don’t check your e-mail when you won’t be able to do a thing about it.  It is generally taught that you should at least be ready to sort things out into places where you know they will be handled later… but there are such cases where you shouldn’t do that “after hours”.  Don’t suffer needlessly.

“The Lord restored the fortunes of Job when he prayed for his friends, and the Lord increased all that Job had twofold.” – Job 42:10

“Trust in the Lord with all your heart,
And lean not on your own understanding;
In all your ways acknowledge Him,
And He shall direct your paths.” – Proverbs 3:5-6